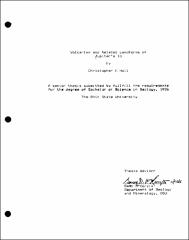 Io's surface is younger and has more active volcanism than any other terrestrial body in the solar system. This volcanism is the result of heat dissipation within Io. The heat is caused by tidal flexing of the crust and strain of the interior of the satellite. Flexing is the combined result of an elliptical orbit, Jupiter's rotation and gravitational field, and the other Galilean satellites' gravitational pull on Io. Io's sister satellites Ganymede and Europa are responsible for holding Io in an elliptical orbit preventing her from returning to a steady-state nonheat producing spherical orbit. Io's lithosphere is segregated into an upper sulfur zone and a lower silicate zone. Each of these zones are divided into layers of materials with lower melting points lie above the layers with higher melting points. This configuration allows heat to be dissipated between the layers and facilitates magma production. The sulfur of the upper zone dominates the surface landforms. Many of the flows have characteristics which a cooling sulfur body would have. Silicate volcanism in the lower zone is evident from the mountain ranges found in the southern hemisphere. The relief of the ranges is too great to be supported by a sulfur crust. It is very difficult to place any age on the mountains. However, the sulfur flows must be very young. This is evidenced by a lack of impact structures on the surface and the dramatic changes found on the satellite's surface in the short interval between Voyager I and Voyager II.