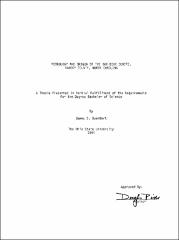 The Day Book dunite body is one of many "alpine-type" ultramafic bodies that outcrop in the Blue Ridge belt of the southern Appalachians. The petrography of the Day Book dunite was studied in thin sections and polished surfaces to identify primary and secondary minerals, paragenetic relationships, and recrystallization and deformational textures. Olivine, enstatite and chromite comprise the primary mineral assemb 1 age, and the secondary minerals include serpentine, talc, chlorite, anthophyllite, magnesite, tremolite and magnetite. Small, recrystallized olivine grains form a mosaic in which are found large, deformed, relict olivine grains. "Disseminated" chromite occurs as polygonal, straightsided grains that represent annealing recrystallization, whereas "massive" chromite exhibits cataclastic texture and alteration to magnetite. The Day Book body formed as upwelled mantle material in a Precambrian rift system along the margin of the North American continent, and it was squeezed and thrust into place during the Taconic orogeny. Lack of contact metamorphism and evidence of chilled borders indicate that the dunite body was emplaced as "cold", solid, mantle-derived ultramafic material that later underwent hydrous alteration during regional metamorphism and/or the intrusion of pegmatites.