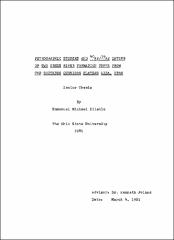 Petrographic, 40Ar/39Ar dating, and stratigraphic data are all implemented in attempting to show the relationship between two tuffs from the Green River Formation in the Southern Gunnison Plateau area and, to determine if the two tuffs are of a common origin. Tuffs LN-1 and G-33 were collected at outcrops 9.66 kilometers apart. The petrographic studies show the tuffs are composed of similar minerals in similar proportions. 40Ar/39Ar dating shows the age of tuff LN-1 is 45.1± o.4 m.y., and tuff G-33 has an age of 45.6± o.4 m.y. The tuffs at both localities are underlain and overlain by identical units of green mudstone and gray limestone respectively. Also, both tuff beds are 25 cm thick. These tuffs may be identical to the tuff (RLM-6-71) studied by Mauger (1977). A common volcanic origin for the tuffs is probable.