A study of the heavy minerals from Topaz Mountain, Juab County, Utah 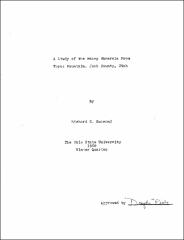 Rock specimens and bulk sediment samples were collected from Topaz Valley, on the southern flank of Topaz Mountain. Both types of samples were examined macroscopically and microscopically. Heavy minerals within the sediment mainly include topaz and specular hematite, with subordinate bixbyite, magnetite, fluorite, and pseudobrookite. The topaz and hematite percentages were significantly different for the four size distributions studied. The topaz content decreases as the grain size decreases. Conversely the hematite content progressively increases as the grain size decreases. Topaz, hematite (only as inclusions), bixbyite, pseudobrookite, and quartz were found in the rock cavities. Contrarily only quartz and feldspar were found as significant percentages in thin section, although topaz, hematite, and pseudobrookite also were found in thin section. The presence of topaz (a fluorine-bearing mineral) at Topaz Mountain, and of fluorite at nearby Spor Mountain, suggest that the region may be an attractive target for molybdenum exploration.