Sediment dispersal from a kimberlite intrusion in Elliott County, Kentucky 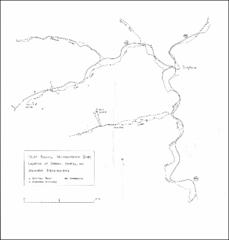 Sediments being transported by streams away from the kimberlite intrusions in Elliott County, Kentucky appear in a characteristic pattern of accumulation which is controlled by the grain size of the sediments and the discharge of the streams. Hamilton Creek has been measured at two points of significance and found to have discharges of 0.414 cubic feet per second and 0.660 cubic feet per second farther downstream. These discharges correspond to seven sediment dispersal patterns of the kimberlite minerals ilmenite, garnet, and dioside in grain sizes of 0.061 mm., 0.125 mm., and 0.250 mm. Similar patterns were established for the same minerals, in the same size range, in Ison Creek. Factors such as the possible addition to the stream of the same minerals from kimberlite outcrops of lesser importance were found to have no noticeable effect on the patterns. Other factors, such as the possible superpositioning of a recent pattern on an older Pleistocene pattern were examined. If this is true, then the recent pattern has almost entirely obliterated the older pattern. Accurately defined patterns, when allied with discharge measurements for any stream, could be a good prospecting tool to help find more kimberlite intrusion outcrops.