AN INVESTIGATION ON THE STRATIGRAPHY AND CONTACT RELATIONSHIPS BETWEEN THE MAWSON FORMATION AND THE BEACON SUPERGROUP AT COOMBS HILLS, SOUTH VICTORIA LAND, ANTARCTICA 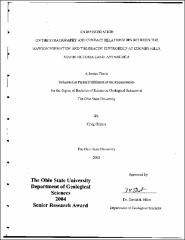 The Jurassic Mawson Formation is a massive, largely unstratified, pyroclastic tuff breccia that was emplaced by phreatomagmatism. It has an aerial extent (>lo0 square km) and thickness (>350 m) that are an order of magnitude larger than deposits similar in nature. The contact relationship between this unit and older Beacon strata is poorly understood. The Mawson Formation has been interpreted to be a stratigraphic unit deposited by debris flows (Balance and Watters, 1971), and as an intrusive deposit forming a phreatomagmatic vent complex (White and McClintock, 2001). Field investigations were performed in the Coombs Hills, south Victoria Land to determine the stratigraphy there, and examine the Beacon - Mawson contact relationship. The sedimentary strata of Coombs Hills have previously been identified as Lashly Formation, Beacon Supergroup, but the specific members have not been reported. Identifying the rock units adjacent to the Mawson tuff breccia is important because it bears directly on the interpretation of the Mawson Formation. Contact relationships were observed at two localities, and six stratigraphic columns were measured in order to determine the stratigraphy. Lashly Members B, C, and D were identified at Coombs Hills on the basis of section measuring and petrographic analysis. Lashly D was found to have a greater thickness (>250 m) than previously recorded in south Victoria Land. The upper 50 meters of Lashly Member D were found to contain abundant silicic glass shards. The contacts observed at Coombs Hills between the Mawson Formation and the Lashly Formation are intrusive. An estimated 150 m of the Mawson Formation occurs above the stratigraphically highest Lashly beds. This information suggests a new interpretation concerning the emplacement of the Mawson Formation. The lower part is intrusive as previously suggested. The upper part, which is comprised of at least 150 m, either accumulated stratigraphically as an extra-vent facies, or the additional topography responsible for confining the Mawson Formation as it was emplaced has been eroded away.