The Effect of Acclimation to Hypoxia on Fish Sensitivity to Ammonia 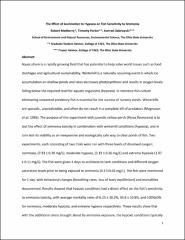 Aquaculture is a rapidly growing field that has potential to help solve world issues such as food shortages and agricultural sustainability. Winterkill is a naturally occurring event in which ice accumulation on shallow ponds and lakes decreases photosynthesis and results in oxygen levels falling below the required level for aquatic organisms (hypoxia). In intensive fish culture eliminating unwanted predatory fish is essential for the success of nursery ponds. Winterkills are sporadic, unpredictable, and often do not result in a complete kill of predators (Magnuson et al. 1985). The purpose of this experiment with juvenile yellow perch (Perca flavescens) is to test the effect of ammonia toxicity in combination with winterkill conditions (hypoxia), and in turn test its viability as an inexpensive and ecologically safe way to clear ponds of fish. Two experiments, each consisting of two trials were run with three levels of dissolved oxygen; normoxia, (7.93 ± 0.39 mg/L), moderate hypoxia, (3.19 ± 0.36 mg/L) and extreme hypoxia (1.97 ± 0.11 mg/L). The fish were given 3 days to acclimate to tank conditions and different oxygen saturation levels prior to being exposed to ammonia (0.37±0.02 mg/L). The fish were monitored for 1 day, with behavioral changes (breathing rates, loss of body equilibrium) and mortalities documented. Results showed that hypoxic conditions had a direct effect on the fish’s sensitivity to ammonia toxicity, with average mortality rates of 6.25 ± 10.2%, 93.8 ± 10.8%, and 100%±0% for normoxia, moderate hypoxia, and extreme hypoxia respectively. These results show that with the additional stress brought about by ammonia exposure, the hypoxic conditions typically found during winterkill conditions become lethal. It suggests that ammonia is a viable chemical to be used for winterkill enhancement