The Influence of Amaferm on Swine Breeding Performance 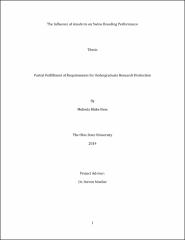 The dietary addition of a prebiotic, like Aspergillus oryzae, to the standard feed of many species has been reported to have positive effects on the digestibility of fiber and in turn improved animal efficiency and nutrient uptake of the animal. In this study thirty-six commercial cross bred breeding females, in two replications of 18 females each were used to evaluate the effects of the addition of Amaferm, Aspergillus oryzae, to their diet. Females were randomly and in equal number allocated at approximately day 70 of gestation within replication to two treatment groups: Control or Amaferm. All females received a standard corn-soy bean meal of the same amount. The Amaferm treatment group received a standard daily dose of 45 g/day of Amaferm to supplement their diet. Sow weight, back fat depth, and body condition score measured to evaluate the performance of the sow and the effectiveness of Amaferm. Colostrum and milk samples were also collected and evaluated for IgA, IgM, and IgG concentrations using an ELISA assay. Number of piglets in a litter and piglet weight was also measured. All results were analyzed using a mixed model procedure of SAS. A P value of <0.05 was considered statistically significant. The results of the present study showed no significant difference between the control and Amaferm supplemented diets for the sow factors, immunoglobulin concentrations, or for the litter. Trends for sow weight, and piglet growth was normal. The Amaferm treatment group lost less weight after farrowing than the control group, which may suggest improved nutrient utilization from the Amaferm diet and the ability to minimize weight loss and maintain body condition score. All immunoglobulin concentrations were higher than previously reported values except for day 14 and day 21 IgG levels. Further research on multiple parity effects and the dosage of Amaferm is needed to determine the effectiveness of Amaferm as a prebiotic feed additive.