American Intelligence and the Question of Hitler's Death 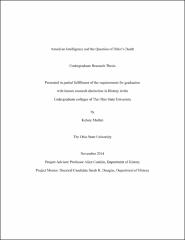 There were many unanswered questions for the Allies of World War II following the Nazi surrender. Invading Russian troops, despite recovering Hitler’s body, failed to disclose this fact to their Allies when the battle ended. In September of 1945, Dick White, the head of counter intelligence in the British zone of occupation, assigned a young scholar named Hugh Trevor-Roper to conduct an investigation into Hitler’s last days in order to refute the idea the Russians promoted and perpetuated that the Führer had escaped. Major Trevor-Roper began his investigation on September 18, 1945 and presented his conclusions to the international press on November 1, 1945. Trevor-Roper conducted enough research in only six weeks to conclusively prove that Hitler had committed suicide on April 30, 1945. He then went on to publish his findings in a book entitled The Last Days of Hitler, which became an instant best seller and remains a source that historians today continue to use. Historian Sarah Douglas conducted research in the British National Archives to explain how Trevor-Roper attained the necessary information for his publication, and along what timeline he received this information. According to Douglas, the British received extensive allied help in interrogating witnesses and synthesizing information from the Americans, but conducted the majority of the investigation on their own. Sarah Douglas’s article raised questions about the degree of American involvement in the investigation into Hitler’s death. It was unclear from Douglas’ research in the UK whether the Americans had conducted a separate investigation of their own or simply contributed to the British investigation. Her research also raised two additional questions: if American intelligence was only peripherally involved, why this lack of interest? What were they doing in their sector? My honors research argues that first, the United States did show some, if limited, interest in the question of Hitler’s death. Second, I argue that in contrast to British intelligence, American intelligence was primarily concerned with accumulating information on: German policy in occupied countries during the war; foreign labor and its impact on the German war machine; censorship and the press’s effect on the war effort; and the German standard of living during the war from captured members of the German state. These discoveries further suggest that the British and Americans shared information, but did not necessarily conduct a joint investigation.