Isotope Geochemical Analysis of Strontium in Conodont Apatite: Implications for Global Cooling and the Timing of the Middle Ordovician Knox Unconformity 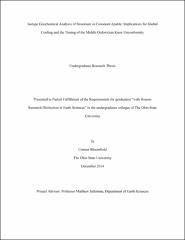 The Middle Ordovician was characterized by marked temperature fluctuations, episodic global lowering of sea level, one of the largest biodiversification events in the fossil record, and a precipitous drop in oceanic 87Sr/86Sr. This study examines the relationships among these factors via geochemical analysis and 87Sr/86Sr age dating of conodonts at the Knox Unconformity at East River Mountain, West Virginia. The East River Mountain data were correlated with counterparts from Knox Unconformity outcrops at Rocky Gap in Virginia and Clear Spring in Maryland. Results give an estimate of 5 Ma for the duration of the Knox Unconformity, and suggest it is composed of multiple unconformities. These unconformities are contemporaneous with seismic activity and regressions found in China and Baltoscandia, suggesting the Knox Unconformity was formed as a result of both tectonic activity and lowering of global sea level. Analysis in this paper suggests that the coinciding of regressions, biodiversification, and oceanic 87Sr/86Sr fall makes the possibility of relations amongst all these factors quite plausible. However, there is insufficient evidence to link them with Middle Ordovician temperature trends.