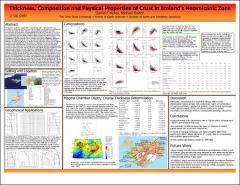 Kelley, D. F., Barton, M., 2005, Thickness, composition, and physical properties of crust in Iceland’s neovolcanic zone, Eos Trans. AGU, 86(52), Fall Meet. Suppl., V13E-0591 We report the results of an ongoing effort to use petrologic data to estimate the thickness, composition and physical properties of crust in the neovolcanic zone of Iceland. The objectives are to constrain the depths of magma chambers, calculate geothermal gradients, and resolve discrepancies in the interpretation of geophysical data (primarily gravity and seismic). 1788 whole rock analyses and 170 glass analyses of erupted Icelandic lavas from the neovolcanic zone have been compiled from published papers. Variation diagrams indicate that Icelandic magmas evolved primarily by crystallization of Ol-Cpx-Plag, whereas the most primitive magmas evolved by crystallization of Ol alone. Phase equilibrium constraints were used to quantitatively estimate the pressure of crystallization along the Ol-Cpx-Plag cotectic and hence the depths of the magma chambers. The latter occur at 20±6.2 km, and the average temperature of magma in the chambers is 1207±26°C (also estimated from phase equilibrium constraints). The results suggest magma chambers located at the base of the crust indicating that the latter is ~20 km thick along the neovolcanic zone in agreement with estimates based on geophysical studies. It is argued that the average composition of erupted lavas provides an accurate estimate of crustal composition because magma evolution occurs in sub-crustal chambers. A representative geothermal gradient was calculated using the average crust composition and surface heat flow measurements. The calculated gradient is consistent with the periodic presence of shallow intracrustal magma chambers at ~5 km depth that have been detected seismically, with hydrothermal circulation in the uppermost 3 km of the crust, and with temperatures of ~1200°C at the base of the crust. The geotherm was used to calculate a density-depth profile for average crust. Densities decrease with depth if a low-pressure mineralogy is used for the crust. This density inversion can be avoided by assuming either that the crust varies in composition (becoming richer in MgO) with depth, or that the composition is uniform and the mineralogy changes to that of a low-P, high-T granulite at 20 km. The latter model involves fewer ad hoc assumptions and provides a close match to accepted densities and seismic velocities for the lower crust. The calculated density contrast between crust and mantle, Δρ, is 150 kgm-3 assuming a mantle density of 3300 kgm-3, whereas VP is calculated as 6.95 kms-1 at the base of the crust.