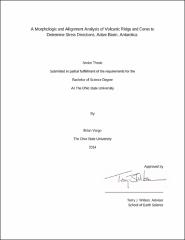 This study examines the tectonic forces at work in a region of Antarctica in the northwest Ross Sea, along the western boundary of the West Antarctic Rift System. The focus is on analysis of a submarine volcanic ridge and associated cones found in the Adare Basin. Multibeam sonar data were examined using spatial analysis tools to map the morphology of the seafloor, specifically to map volcanic cones and their alignments to constrain crustal stresses. The analysis revealed that the NE-SW volcanic ridge is composed of four segments of varying trend. Cone alignments and the long axes of elongate volcanic cones have trends generally parallel to the ridge segments. These results suggest that the crustal stresses at the time of magmatism consisted of NE-SW maximum and NW-SE minimum horizontal stresses. The volcanic ridge, cones and cone alignments are parallel to and spatially linked with mapped normal faults in the area. The presence of en echelon cone alignments in a zone that runs parallel to the volcanic ridge and fault trends suggests that right-lateral shear occurred along pre-existing faults at the time of emplacement. An overall rhombic shape of the ridge and a wider central ridge area are consistent with shear along curved, pre-existing faults. Pre-existing rift faults apparently acted as conduits for magmatism to reach the surface.

The Shell Exploration and Production Company