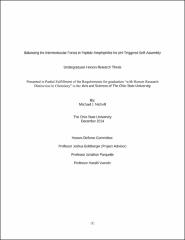 The design of novel self-assembling biomaterials that change morphology in response to specific stimuli can lead to much advancement in designing next generation sensors, diagnostic and therapeutic agents. We have previously developed a new class of self-assembling materials known as peptide amphiphiles (PA) that transform from spherical micelles to nanofibers in the slightly acidic environment of cancerous tissue, as a novel mechanism to enhance their accumulation at the tumor site relative to normal tissue. A typical PA that we construct consists of an alkyl tail, followed by an amino acid sequence, and terminated with a MRI imaging agent. However, designing this vehicle that will transform under a specific pH value in vivo requires a more detailed understanding of the relative attractive hydrophobic and the repulsive electrostatic forces in these surfactant-like molecules. Here, we specifically studied how the alkyl chain length, the number of anionic amino acids in the molecule’s charged region, and the number of tyrosine (Y) residues in the its beta sheet region affect the sphere to nanofiber transition pH, starting from palmitoyl-YYAAEEEEK(DO3A:Gd)-NH2. In general, it was shown that increasing the alkyl chain length promotes nanofiber formation under a given set of conditions, while increasing the number of charged amino acids promotes micelle formation. Furthermore, it was determined that the addition of a fifth glutamic acid shifts the pH of the sphere to nanofiber transition to a slightly more acidic value as compared to the deletion of a single methylene group or tyrosine residue.