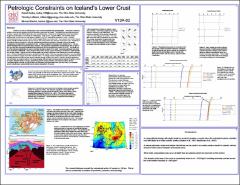 Kelley, D. F., Leftwich, T. E., Barton, M., 2005, Petrologic constraints on Iceland’s lower crust, EOS Transitions AGU, 86(18), Joint Assembly Supplement, V13A-02. ABSTRACT: Iceland is an area of relatively thick ocean crust that straddles the spreading MAR. Iceland was created by seafloor spreading originating about 55 Ma above abnormally hot mantle. The high temperatures resulted in greater melt volumes that enhanced crustal thickening. Geophysical investigations provide fundamental insight on crustal features, but results are contradictory. Early seismic, magneto-telluric, and resistivity studies predicted thin crust with partial melt regions at depths of 10-15 km beneath the neovolcanic zones. Reinterpretations based on recent seismic studies suggest thicker and cooler crust. These studies have shown magma lenses at shallow depths beneath volcanic centers, but cannot confirm their presence in the lower crust. Knowledge of the depth of magma chambers is critical to constrain the geothermal gradients in Icelandic crust and to resolve discrepancies in interpretation of geophysical data. Analyses of glasses in Icelandic lavas erupted from 11 volcanic centers throughout the rift zones have been compiled. The pressures of equilibration of these liquids with ol, high-Ca pyx, and plag were estimated qualitatively from projections into the pseudoternary system Ol-Di-Qtz. The results (ca. 0.6 GPa) indicate crystallization in magma chambers located at about 20 km depth. Equilibrium pressures also have been calculated quantitatively. These results (0.6±0.2 GPa) indicate magma chambers at 19.8±6.5 km depth beneath the volcanic centers. Magma chamber at these depths are located in the lower crust inferring that it must be relatively warm. Geothermal gradients have been calculated using the depths of the sourcing magma chambers and any shallow seismically detected magma chambers at each location. An average crustal composition has been calculated from the compiled geochemical data and was used to calculate density variations and seismic velocities along the geotherms. The distribution of sample locations in this study provides sufficient data to characterize the Iceland rift system in terms of magma chamber depths, rock type, geothermal gradient, density variation, and expected seismic velocity. Calculated density contrasts across the moho are consistent with those determined gravimetrically, and calculated seismic velocities are consistent with seismic studies beneath the rift system.