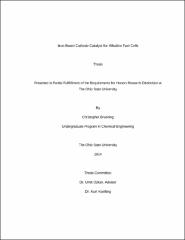 Alkaline fuel cells take advantage of the reaction between hydrogen and oxygen to produce water and an electrical current. During the reaction, a hydroxide ion passes through a membrane from the oxygen side cathode to the hydrogen side anode. Previous research had been conducted on synthesis and evaluation of iron based catalysts for PEM fuel cells by the Heterogeneous Catalysis Research Group at The Ohio State University. PEM fuel cells use a similar reaction between hydrogen and oxygen except a proton travels across the membrane from the hydrogen side to the oxygen side, so the reaction mechanism differs. This paper looks into those same iron based catalysts tested in an alkaline environment. The catalyst in particular is 1% iron in 1:1 Black Pearls 2000 : 1,10 phenanthroline. Those precursors are combined using a wet impregnation and then the result is ball milled. It then undergoes an argon pyrolysis at 1050oC and an ammonia pyrolysis at 950oC which are the final steps in the synthesis. The completed catalyst can then be washed in acid for 1 hour, 2 days, or 1 week to compare the effect of acid washing on different factors. The different catalysts are compared at each stage in the synthesis mainly by their onset potential, which is the voltage where it produces a current density of 0.1 mA/cm2. Another method of comparison is the selectivity of a catalyst towards the main reaction vs a side reaction that produces hydrogen peroxide. It was found that this catalyst performed comparably with platinum for both onset potential and selectivity. Another finding was that the acid washing did not have a very significant effect on either.