Man to Man: Desire, Homosociality, and Authority in Late-Roman Manhood 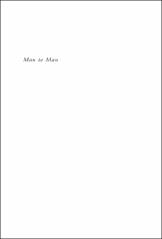 "In an analysis that promises to be controversial, Man to Man: Desire, Homosociality, and Authority in Late-Roman Manhood surveys the presence of same-sex desire between men in the later Roman empire. Most accounts of recent years have either noted that sexual desire between men was forbidden or they have ignored it. This book argues that desire between men was known and that it was a way to express friendship, patronage, solidarity, and other important relationships among elite males in late antiquity. The evocation of this desire and its possible attendant corporeal satisfactions made it a compelling metaphor for friendship. A man's grandeur could also be portrayed metaphorically as sexual attractiveness, and the substantial status differences often seen in late antiquity could be ameliorated by a superior using amatory language to address an inferior. At the same time, however, there was a marked ambivalence about same-sex desire and sexual behavior between men, and indeed same-sex sexual behavior was criminalized as it had never been before. While rejection and condemnation may seem to indicate a decisive distancing between authority and this desire and behavior, authority gained power from maintaining a relation to them. Demonstrating knowledge of the actual mechanics of sex between men suggested to a witness that there was nothing unknown to the authority making the demonstration: authority that knew of scandalous masculine sexual pleasure could project its power pretty much anywhere. This startling dissonance between positive uses of same-sex desire between men and its criminalization in one and the same moment-a dissonance which recent discussions have been unable to address-requires further investigation, and this book supplies it."