Effectiveness of Predator Guards on Nest Boxes for House Wrens 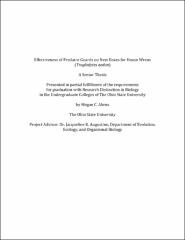 Predation limits reproduction and survival in many animals. Some bird species protect their eggs by laying them in cavities, limiting the predators’ access to the nest. Nesting boxes are often used to increase the nesting opportunities of cavity-nesting birds, but they are susceptible to predators. We tested the effectiveness of three types of predator guards relative to a control (no predator guard): “extension” of the entrance to prevent predators from reaching into the nest box, “tube” which prevents predators from getting a grip on the pole, and a “funnel” which predators cannot proceed past. We predicted that the funnel guard would increase the nest success of the House Wrens the most because it would prevent a diverse array of predators from climbing the nest box pole. Additionally, we expected the wrens would nest equally in all of the boxes. Thirty nest boxes of each type (control, extension, tube, and funnel) were distributed equally among a wooded area, a golf course, and a park (120 nest boxes total). House wrens attempted nests in all predator guard types equally. The tube predator guard had the greatest proportion of nests that successfully fledged at least one offspring, whereas wrens nesting in control boxes were the least successful. An unexpected finding was that some predators accessed nest contents by removing the lids and that this occurred most often in the boxes with the entrance extension. Our first prediction was not supported, the tube was the most successful, not the funnel. Our second prediction was supported because the wrens nested equally in all of the boxes. In the future, the box lids should be more secure so they cannot be removed. Additionally, future research should determine whether greasing the tube decreases predation further. This study demonstrates that predator guards are effective in reducing predation of nests in artificial boxes.