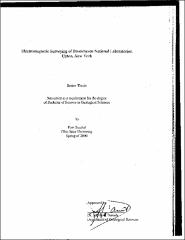 An electromagnetic survey at Brookhaven National Laboratories was conducted in order to locate pits hidden beneath the surface. The pits were used as waste disposal in the past and consequently their removal became necessary for health reasons. The two areas of study at the Upton, New York facility were named the ChemicaVAnimal Pits Area and the Glass Hole Pits Area. These areas were surveyed and the results processed to find the number and approximate lateral location of the pits in question. Using the conductivity to locate the pits as anomalies, the surveys located the pits. The survey attempted to prove that electromagnetic surveying could be utilized to see into the ground and locate objects with a different conductivity than that of the medium it rested in. By running survey lines across the areas, the survey could systematically locate the pits by taking note of the positions of the anomalies that stood out in the earth. The results of the survey were positive and the pits stood out markedly in the ground as anomalies. The data clearly shows the number of pits and their location along the grid in each area. The pits had their locations found correctly by the results from the survey and then were removed to prevent any hrther contamination of the ground. Other geophysical surveying was done at Brookhaven National Laboratories and the locations of the pits from those results match up very well with the data collected by the EM3 1 and EM6 1 electromagnetic surveying.