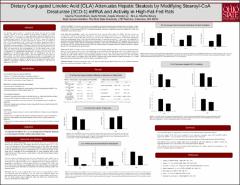 Non alcoholic hepatic steatosis is associated with obesity and may lead to insulin resistance. Isomers of CLA are naturally occurring dietary compounds with health promoting effects. The role of CLA in attenuating hepatic steatosis and hyperglycemia is complex. Here, we investigated the extent that CLA protects male Wistar rats from developing hepatic steatosis. Rats were fed a 20% fat diet for 4 weeks then changed to either control (CON) diet or CLA diet containing 6.5% soybean oil or 5% soybean oil plus 1.5% CLA respectively. After 4 weeks, CLA diet did not change food intake or body weight however fasting blood glucose (FBG) and hepatic triglycerides (TG) were significantly reduced compared to CON group. Reduced TG levels were associated with significantly lower SCD-1 mRNA levels measured by real time PCR and SCD-1 activity which was determined by gas chromatography. As the rate-limiting enzyme in the cellular biosynthesis of oleate and palmitoleate, SCD-1 activity is indicative of synthesis of components of TG, phospholipids and cholesterol. The effects of CLA on SCD-1 were independent of the adipocytokine, leptin, which was unchanged in rats fed CLA. Because leptin is known to suppress SCD-1, these data suggest CLA acts in part as a leptin mimetic. The mRNA levels of gluconeogenic enzymes were unchanged in the CLA fed group. Thus, the lower hepatic lipid accumulation may be modulated by SCD-1 independent of changes on adipose or leptin levels. We anticipate these hepatic effects explain the improvement of glucose levels in Wistar rats fed CLA. This work was supported by the USDA.