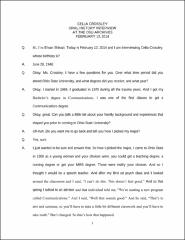 Celia Crossley attended The Ohio State University from 1966 to 1970 when she earned a bachelor’s degree in Communications, then a new major at the University. In this interview, Crossley discusses how she ended up attending OSU, and about student life at the University, particularly for women, who were restricted much more at the beginning of her time at OSU than at the end. Her discussion also includes her memories of the spring riots of 1970 and what campus was like during the summers. She also talks about life in the dorms and in the sorority, and her attempts to get a job after she graduated. Included is her recounting of the graduation ceremony in 1970, after which she ended up on the national news. Finally, she discusses opportunities for women during that period and how they have changed over time.