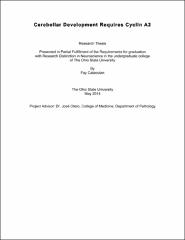 Cyclins regulate transitions through the cell cycle by activating cyclin-dependent kinases to phosphorylate other enzymes into an active state. Cyclin A2 regulates S-phase transitions, and is observed in two isoforms: a full-length (“A60”) form and a truncated (“A38”) form. The goal of this study was to determine the function of cyclin A2 in proliferating neural progenitor cells. To achieve this goal, we performed a developmental analysis of mouse brains for the presence of Cyclin A2. Cyclin A2 was identified in proliferating cells of the developing cerebellum as well as in neurons of the adult cortex. We identified the A60 form of Cyclin A2 in the developing cerebellum, while the A38 form was found in differentiated areas of the brain including the adult cerebellum and cortex. We concluded that A60 predominates during cerebellar growth whereas the A38 form predominates during cerebellar maturation, suggesting that proliferating neural progenitor cells are characterized by the A60 form whereas differentiated cells are characterized by the A38 form. Cre/lox-based deletion of cyclin A2 in neural progenitors was lethal and resulted in cerebellar hypoplasia, decreased proliferation of cerebellar granule neuron progenitors, and Purkinje neuron dyslamination. To assess a potential mechanism by which cyclin A2 promotes normal cerebellar structure, we examined the size of the cerebellar external granule layer (EGL). At embryological day 14.5, the EGL showed a significant decrease in volume in cyclin A2-null cerebella compared to controls. Furthermore, we observed a large increase in apoptotic cells in the EGL. These differences were not observed in older embryos, indicating that early loss of cells of the EGL leads to the observed cerebellar defects. These data show the vital role cyclin A2 has in cerebellar morphogenesis and cortical organization.