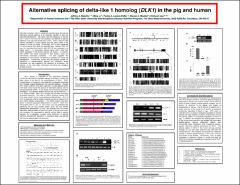 Delta-like homolog 1 (DLK1), a paternally imprinted gene with several alternative splicing isoforms, is an important regulator of fetal and postnatal development. We report here the sequence of porcine DLK1 (pDLK1) and examine the expression and alternative splicing isoforms in the pig (Sus scrofa) and human. DLK1-A was the sole isoform identified in human tissues and has been shown to be present in mouse and cattle. Surprisingly, DLK1-A was undetected in various tissues from fetal and postnatal pigs. Instead, DLK1-C2 was the most abundant isoform while DLK1-B was expressed to a lesser extent. In fractionated adipose tissue, pDLK1 was most highly expressed in the stromal-vascular cell fraction. In addition, total pDLK1 was highly expressed in fetal adipose tissue but dramatically decreased postnatally. Our data suggests that expression of DLK1-B and -C2 isoforms is sufficient for normal pig development. Furthermore, human and pig samples showed no alterations in species-specific splicing, but expression levels decreased with age suggesting that regulation of expression, not splicing, is the most likely mechanism controlling the biological function of DLK1.