Identification, pathogenicity, and fungicide sensitivity of Pythium species associated with corn and soybean seed and seedling disease in Ohio. 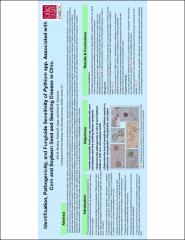 Cool moist conditions in combination with minimal tillage, earlier planting, and recent changes in commercial seed treatment active ingredients have led to an increase in establishment problems. Persistent reduction in stands over the years has led to the current investigation of Pythium species associated with seed and seedling disease of corn and soybean in Ohio. Samples of diseased corn and soybean were collected from 40 locations in Ohio and northeastern Indiana. All isolates of Pythium recovered were identified to species, evaluated in an in vitro pathogenicity assay on both corn and soybean seeds, and a subset of the isolates were tested for their sensitivity to fungicides currently used as seed treatments. Twelve species and two distinct morphological groups of Pythium were identified, of which 6 species were moderately to highly pathogenic on corn seeds and 9 species were highly pathogenic on soybean seeds. There was significant variation (P<0.01) in sensitivity to mefenoxam, azoxystrobin, trifloxystrobin, and Captan both across species and within species of Pythium. In addition, sensitivity to azoxystrobin and mefenoxam were associated with the sporangial morphology of the species. This research has shown that multiple species of Pythium have the capacity to reduce germination of both corn and soybean seed leading to decreased emergence. In addition, mefenoxam, azoxystrobin, trifloxystrobin, and captan, as seed treatments, may not be able to inhibit infection by all pathogenic species of Pythium.