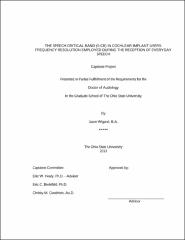 It is widely recognized that cochlear implant (CI) users have limited spectral resolution and that this represents a primary limitation. In contrast to traditional measures, Healy and Bacon [(2006) 119, J. Acoust. Soc. Am.] established a procedure for directly measuring the spectral resolution employed during processing of running speech. This Speech-Critical Band (S-CB) reflects the listeners’ ability to extract spectral detail from an acoustic speech signal. The goal of the current study was to better determine the resolution that CI users are able to employ when processing speech. Ten CI users between the ages of 32 and 72 years using Cochlear Ltd. devices participated. The original standard recordings from the Hearing In Noise Test (HINT) were filtered to a 1.5-octave band, which was then partitioned into sub-bands. Spectral information was removed from each partition and replaced with an amplitude-modulated noise carrier band; the modulated carriers were then summed for presentation. CI subject performance increased with increasing spectral resolution (increasing number of partitions), never reaching asymptote. This result stands in stark contrast to expectation, as it indicates that increases in spectral resolution up to that of normal hearing produced increases in performance. Accordingly, it is concluded that CI users can access spectral information as high as that of normal hearing (NH) when presented with narrowband speech stimuli. These results have implications for the design of future devices that allow better representation of tonal languages, music, and speech in noise.