Community-Mindedness: Protection against Crime in the Context of Illicit Drug Cultures? 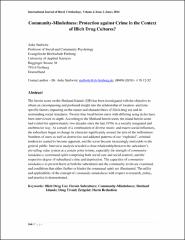 The heroin scene on the Shetland Islands (GB) has been investigated with the objective to obtain an encompassing and profound insight into the relationship of location- and time-specific factors impacting on the nature and characteristics of illicit drug use and its surrounding social structures. Twenty-four local heroin users with differing using styles have been interviewed in-depth. According to the Shetland heroin users, the island heroin scene had existed for approximately two decades since the late 1970s in a socially integrated and unobtrusive way. As a result of a combination of diverse micro- and macro-social influences, the subculture began to change its character significantly around the turn of the millennium: Numbers of users as well as destructive and addicted patterns of use “exploded”, criminal tendencies started to become apparent, and the scene became increasingly noticeable to the general public. Interview analysis revealed a close relationship between the subculture’s prevailing value system at a certain point in time, especially the strength of community-mindedness (communal spirit comprising both social care and social control), and the respective degree of subcultural crime and deprivation. The capacities of community-mindedness to prevent harm at both the subcultural and the community levels are examined, and conditions that either further or hinder the communal spirit are illuminated. The utility and applicability of the concept of community-mindedness with respect to research, policy, and practice is demonstrated.