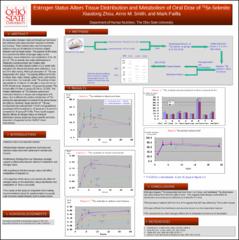 An association between male and female sex hormones and selenium (Se) status has been reported in animals and humans. These relationships may be important relative to the use of selenium in hormone related diseases such as breast cancer. The purpose of this study is to examine the effect of estrogen status on the absorption, tissue distribution and metabolism of Se. 60 µCi of 75Se as selenite was orally administered to bilaterally ovariectomized rats 5 weeks after implantation of either placebo pellet (-E) or pellet with estradiol (+E). Blood and tissues were collected 1, 3, 6, and 24 h after dosing. Although absorption of 75Se was independent of E status, 75Se activity differed (P<0.05) in blood, liver, heart, kidney, spleen, brain, and thymus at certain times. For example, total 75Se activity in liver was greater in -E than in +E rats after 1 hour (13.1% vs. 3.9% of total dose). However, +E group had greater 75Se in liver after 6 h than -E group (18.0% vs. 10.9%). The relative distribution of 75Se between cytosol and membrane fractions in tissues was independent of E status. Nor it affected the relative distribution of 75Se among the selenoproteins in cytosol of the above tissues and plasma. However, larger percent of 75Se was incorporated into selenoprotein P (SeP) and glutathione peroxidase (GPx) in plasma in +E group at 3, 6 and 24 h compared to -E group (P<0.05). These results suggest that the effects of estrogen status on selenium distribution among tissues are tissue specific and time-dependent.

Supported by the OARDC Grant OHO00201