Quantifying Differences in Water Quality Metrics in the South Fork and East Branch Tributaries of the Sugar Creek Watershed, Ohio 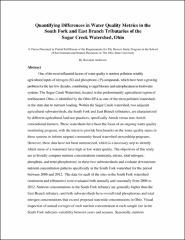 One of the most influential factors of water quality is nutrient pollution, notably agricultural inputs of nitrogen (N) and phosphorus (P) compounds, which have been a growing problem for the last few decades, contributing to algal blooms and eutrophication in freshwater systems. The Sugar Creek Watershed, located in the predominantly agricultural region of northeastern Ohio, is identified by the Ohio EPA as one of the most polluted watersheds in the state due to nutrient loading. Within the Sugar Creek watershed, two adjacent agricultural subwatersheds, the South Fork and East Branch tributaries, are characterized by different agricultural land use practices, specifically Amish versus non-Amish conventional farmers. These watersheds have been the focus of an ongoing water quality monitoring program, with the intent to provide benchmarks on the water quality status in these systems to inform targeted community based watershed stewardship programs. However, these data have not been summarized, which is a necessary step to identify which areas of a watershed have high or low water quality. The objectives of this study are to broadly compare nutrient concentrations (ammonia, nitrate, total nitrogen, phosphate, and total phosphorous) in these two subwatersheds and evaluate downstream nutrient concentration patterns specifically in the South Fork watershed for the period between 2006 and 2012. The data for each of the sites in the South Fork watershed (mainstem and tributaries) were evaluated both annually and seasonally from 2006 to 2012. Nutrient concentrations in the South Fork tributary are generally higher than the East Branch tributary, and both subwatersheds have overall total phosphorous and total nitrogen concentrations that exceed proposed statewide concentrations in Ohio. Visual inspection of annual averages of each nutrient concentration at each sample site in the South Fork indicates variability between years and seasons. Seasonally, nutrient concentrations are generally lowest in the spring and highest either in summer (NH3, TN, and TP) or autumn (PO43-), which is interpreted to reflect the timing of fertilizer application. Within the South Fork tributary, statistical differences exist between the mainstem sample sites and suggest significant downstream trends of increasing nutrient concentrations at least for phosphorous nutrients. More detailed research is needed to more rigorously evaluate the effect of Best Management Practices (BMPs), which were implemented in tributaries within the South Fork watershed in 2006, as well as other environmental variables on water quality such as topography and soil characteristics and land use/land cover, including the presence of riparian buffers.