Examining the Geological Potential for Helium Production in the United States 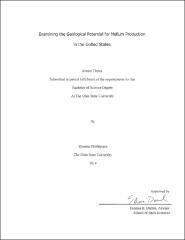 Global helium demand has more than doubled throughout the last twenty years in response to the development of new manufacturing and scientific research techniques. In fact, data collected by the National Science Academies have shown that global demand for helium is likely to outstrip global supply by 2020. Despite these rapid increases in helium demand and the looming shortfall in helium supplies, recent United States federal legislation has mandated the deregulation of the U.S. federal helium reserve managed by the U.S. Bureau of Land Management. Because the United States has been a global leader in the recovery and storage of helium since the early 1900s, and continues to be the leading global producer and reserve holder of helium today, this decision has created considerable uncertainty in global helium markets. As a result, other countries such as Qatar, Algeria, and Russia have begun to develop their own helium resources. These changes in global helium markets highlight the need to better characterize domestic unconventional helium reserves globally. This research examines the potential for helium production in the United States.