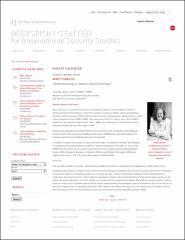 The war with al-Qaida is not over.  Despite the best efforts of three U.S. presidents, the engagement of the world's most competent and effective militaries, and counter-terrorism campaigns supported and carried out by the international community, al-Qaida has grown in strength and reach over the past 20 years.  How an organization without territory and without the institutions and protections of a nation-state has managed to thrive under constant pressure from almost every country on the globe demands explanation.  It is also vital for our security that we understand al-Qaida’s likely future courses of action.  While there are many ways to approach these critical issues, understanding the strategies used by al-Qaida not only to survive, but to flourish during the fight, is absolutely essential.  Mary Habeck will address the key issue of al-Qaida's grand strategy, which is also the subject of her new book Attacking America: Al-Qaida's Grand Strategy (Basic Books, 2014).