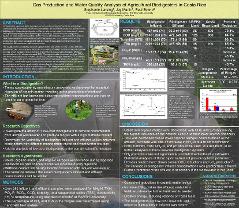 In developing countries, water pollution and access to energy resources are interrelated challenges that encompass issues of human health, environmental protection, and economic development. Anaerobic biodigesters utilize on-site animal waste to simultaneously reduce water pollutants and produce methane gas for cooking. Nine low-cost biodigesters, located on small-scale farms in the Limon Province of Costa Rica, were studied in order to determine wastewater treatment ability and methane production. The variability among wastewater at the seven biodigesters was also examined to determine the influence of wastewater differences on methane production. The biodigesters consistently reduced organic matter and solids by 79% – 91%, and total kjeldahl nitrogen (TKN) by 46%. Ammonium (NH4-N) increased by 43% during the digestion process, which increased the usefulness of the effluent as an organic fertilizer. Methane concentrations in the biogas averaged 65%. Through principle component analysis (PCA) and multivariate analysis of variance (MANOVA), chemical oxygen demand (COD), turbidity, NH4-N, TKN, and pH were determined to be the most useful parameters to characterize the wastewater. There were significant variations between the wastewater influent and effluent concentrations, but these variations did not significantly influence the methane concentrations produced within each biodigester. The biodigester outflow concentrations exhibited less variation than the inflow concentrations, which suggests that these systems are robust to fluctuations in wastewater concentrations.