The Relational Context of Radicalization: The Case of Jewish Settler Contention before and after the Gaza Pullout 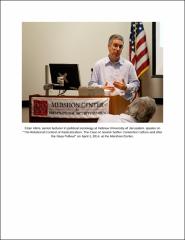 Why is it that some social movements engaged in contention experience radicalization of member factions, whereas others do not? The fact that in the vast majority of cases opposition movements experience a shift to political violence on the part of one or more organization must not lead us to overlook "exceptions to the rule." Indeed, there are times when violent-prone ideologies and aggressive propensities do not translate into violent mode of contention. To explain those exceptions, I argue that relational mechanisms mediate the influence of motives for aggression and ideologies that justify violence on actual engagement in violence, through their separate, but most centrally their combined operation in forming what I term Infrastructure of Coordination. A comparison of two "similar yet different in outcome" episodes of Jewish settler contention offers strong support for the key role relational mechanisms play in specifying the possibility of radicalization. Despite ample environmental stimuli and widespread violent-prone ideologies constant in both episodes, in the Gaza pullout radicalization was impeded as a result of high levels of coordination established between and within the contending parties and, conversely, in the dismantling of Amona outpost the disintegration of IOC propelled radicalization. Supportive evidence is provided from a multi-methods, mechanism-based design, including in-depth interviews with key players, content analysis of various movement-based news outlets, social network analysis, and contention-repression data. In concluding, I discuss the generalizability of the findings and the "exceptionality" of the Jewish settlement case.