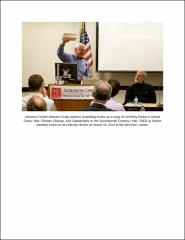 Global Crisis examines how a fatal synergy between climate change and human inflexibility eradicated one-third of the planet's human population and unleashed an unparalleled spate of wars, invasions, and revolutions. Personal accounts and scientific data alike show how extreme weather disrupted growing seasons and destroyed harvests, bringing hunger, malnutrition, forced migration, and disease, and then, as material conditions worsened, economic chaos, political anarchy, and social collapse. The Global Crisis of the 17th century killed tens of millions of people. A natural catastrophe of similar proportions today – whether or not humans are to blame – will kill billions, produce dislocation and violence, and compromise international security and cooperation. Unlike our ancestors who faced the challenges of climate change 350 years ago, today we possess both the resources and the technology to mitigate the consequences through good policy and legislation. The consequences of inaction, in the 21st as in the 17th century, are intolerable: We can either pay to prepare now – or pay much more to repair later.