The CIA: Its Origins, Its Transformation, and Its Militarization 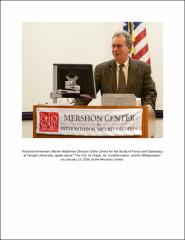 The contemporary CIA more closely resembles Hollywood's fictional portrayal than the institution envisioned by the Truman administration and Congress in 1947. During the initial Cold War years, a confluence of bureaucratic politics, individual initiatives, and strategic preferences rapidly and radically transformed the CIA's identity from an agency established to collect and analyze intelligence to one preoccupied with covert and paramilitary operations. This legacy of distorted purpose continues to plague the CIA today. With the onset of the Global War on Terror it has evolved into what journalists describe as a "Killing Machine."  This talk by Richard H. Immerman traces this history and argues that the intelligence challenges of the 21st century demand that the CIA recommit itself to the "original intent" of its designers by rededicating itself to its core mission of analysis.