Chasing Ghosts: The FBI and Counter-Terrorism 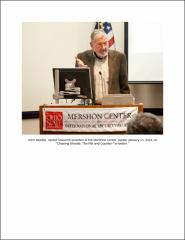 After September 11, 2001, the Federal Bureau of Investigation greatly increased its efforts at, and changed its approach to, counter-terrorism. This talk explores the abrupt rise and continuing persistence of official fears of terrorism. Important in this is the effect of the "threat matrix" that coordinates and drives the quest to follow up 5000 almost entirely fruitless "threats" each day, a process some in the FBI call "ghost-chasing." In the process, an estimate is made about how many terrorist acts would have had to have been committed in the United States but for the intelligence and policing efforts of the Bureau to justify its counter-terrorism expenditures. Included is an examination of a set of case studies of all the apparent Islamist extremist plots since 9/11 to inflict damage in the United States. Also explored: the potential efficacy of policing efforts using simple, if forceful, warnings to putative terrorists rather implanting informants among them.