The Rhetoric of Individualism in The Sopranos, Breaking Bad, and The Wire 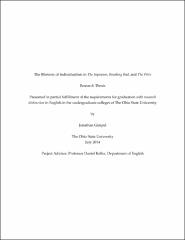 Individuality has always been one of the most prominent aspects of American ideology. Since its inception the U.S. has been the nation of the individual, praising and awarding the self-reliant, the opportunistic, the iconoclastic. And yet this focus on individuality does not operate within a vacuum—it affects how we understand our American collectivity, including social expectations and responsibilities. And, as of late, studies have pointed to a growing sentiment that there is a lack of physical community (especially among twenty-somethings) indicating that while the rhetoric of the individual is a powerful motivator, it might not ultimately satisfy. This question becomes especially important with regards to the current political climate in America. Polls indicate that Americans, over the past 50 years or so, have increasingly lost their faith in governmental institutions, and movements such as Occupy Wall Street confirm that Americans are increasingly of the opinion that the sociopolitical order in America is breaking down—the divergence between the rich and poor becoming ever more severe and egregious. With this, then, the way that we think about the individual v. the collectivity becomes exceedingly relevant. Therefore, as a way of approaching this problem, I am going to focus on television shows that deliberately deal with the individual’s relation to the social in American society. The shows that I plan to focus on will be Mad Men, The Sopranos, Breaking Bad, and The Wire. The first three shows find resolution of social problems (such as inequality, crime, etc.) in the individual, while The Wire finds resolution of these problems in systemic reform. The reason this approach works for thinking about the realities of contemporary American culture is because television is inherently a consumer product. So I will be analyzing it not so much for what it does to us, but what it says about us, how it reflects our desires, demands, and fantasies. My primary focus with regards to viewer response is that the characters in the three pro-individualism shows are near-sociopathic (if not fully so), and yet audiences have consistently found them interesting and appealing (even to the surprise of some of the shows’ creators), vicariously embracing immoral and individualized solutions to social problems. Additionally, I will be drawing on research from a variety of fields in my analysis, including psychology, sociology, philosophy, and politics, while the center of my analysis will be close examinations of specific episodes of these shows, focusing on how they exemplify an emphasis on the individual (or the social, in the case of The Wire) as the primary means of conflict resolution. This thesis therefore will specifically be thinking about the American rhetoric of these TV shows, focusing on the underlying ideologies behind them. For, when rhetoricians study pop culture, they’re interested in the persuasive messages and ideologies being promoted. Hence this study fills a gap not only because it focuses on recent television shows, but also because it examines these shows as a reflection of the current American problem of socioeconomic inequality.