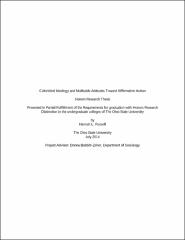 As expressed prejudice declines in the post-civil rights era, considerable social science research has explored the nature of modern racial ideology. One element of today’s racism is the insidious belief that there is no longer racial inequality in America, thus being “blind” to race is seen as ideal (e.g., Bonilla-Silva 2014). Colorblind attitudes have been studied at length, particularly with regards to affirmative action, though no study has yet examined how malleable these attitudes are when people are faced with differing demographic contexts in an academic setting. To fill this void, this survey-based study uses a unique experimental design that poses various racial demographics at a hypothetical college. I use these data to then determine the effect of context on 512 participants’ support for the college to place extra effort into increasing the number of students of underrepresented racial groups. This study reveals that, while colorblind attitudes do predict opposition to such efforts, opposition still wavers significantly depending on the demographics at the college. This suggests that colorblind attitudes toward social policies like affirmative action are more malleable than previously realized. I conclude with discussion of the implications of these findings for contemporary race relations in a “post-race” society.