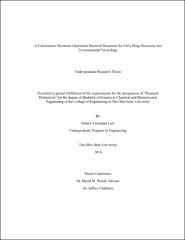 Many biosensors that have been developed to sense environmental changes or chemicals rely on change of phenotype assays. These assays often require special equipment or addition of reagents to detect fluorescence and can be both time and cost intensive. Here, a colorimetric in-vitro ligand–binding assay is proposed using β-galactosidase (β-gal, from the lacZ gene) in bacterially-expressed protein biosensors. The use of β-galactosidase-based assays (based on ONPG hydrolysis) for ligand-binding biosensors presents the advantage that β-galactosidase and the related reagents/equipment necessary are cost-effective, easily reproducible, commercially available, and much faster than traditional assays. The work to be presented was started with an established biosensor that transduces a test hormone-binding activity (estrogen) into a growth-phenotype. To obtain a colorimetric signal for binding rather than a growth phenotype, the growth phenotype reporter gene (thymidylate synthase) was replaced in the biosensor expression vector with the β-galactosidase gene. To verify our vector activity, cells were grown with and without estrogen and colorimetric assays were carried out on cell lysates to determine β-gal activity. Originally, the vector containing β-galactosidase was expressed in BL21(DE3 T7g1) recA lacZ+ strain (BLR) but the chromosomal lacZ+ was contributing background noise to the assay. To eliminate this background signal, the strain ER2566 (ΔlacZ::T7g1) was used for expression studies and three trials of β-gal assays implied higher β-gal / lacZ+ activity for cells grown with ligand than cells grown without ligand, suggesting the strain background was no longer contributing to noise. Next, cells were grown in the absence of the estrogen ligand and were lysed as estrogen was added to the lysate with the colorimetric assay reactant in-vitro while optimizing the dilution to allow for a longer assay so that the in-vitro additions of ligand would have adequate time to bind and potentially increase activity. Despite multiple attempts, no appreciable results were obtained during this step. A new experiment was devised which consisted of purifying the target protein of any proteases and cell debris through affinity chromatography involving binding to an amylose resin column. Estrogen ligand was then added to the purified protein and colorimetric assays were performed to test for increased β-gal activity. The in-vitro estrogen ligand additions to the purified protein showed no discernible changes in activity trends between the controls and samples tested. A hypothesis was formed that when cells took up the ligand in-vivo during growth, the ligand helped the ligand-binding domain fold properly during translation which produced the desired activity increase. However, it is believed that when the ligand was introduced in-vitro after lysis or purification, the ligand binding domain was improperly folded or the active site was buried which caused the suppression of changes in enzyme activity. A series of experiments were then carried out involving the in-vivo introduction of a weakly-binding stabilizing molecule (an estrogen antagonist) that would bind and help the ligand-binding domain fold properly during translation with the hope of introducing estrogen agonists in-vitro after lysis or purification that would theoretically compete for binding and cause an increase in enzyme activity. Several experimental variations had been utilized along with many trials, but in-vitro estrogen ligand additions with or without antagonist molecules introduced in-vivo failed to produce any changes in β-gal enzyme activity. An additional experiment that had been performed concurrently to those presented here involved a similar construct to the human estrogen receptor but the receptor was of the human thyroid (TRβ), which has intrinsically higher signal to noise. The addition of thyroid ligands taken up in-vivo showed an identical trend with the thyroid receptor biosensor to that of estrogen additions to the estrogen biosensor. Although increased activity was defined at this step in an analogous manner, the failed progress of the estrogen receptor biosensor led to conclusion that the thyroid biosensor would behave in a similar manner and yield inconclusive in-vitro findings. As such, in-vitro ligand additions with the thyroid biosensor were never attempted due to the comparable nature of the hypothesized ligand-binding domain folding problem and due to the fact that there are no known thyroid antagonists that could potentially bind in-vivo only to get competitively displaced with the addition of binding thyroid agonists in-vitro.