Cytological Study of the Expression of Soybean Partial Resistance, Rps2, and Root resistance to Phytophthora sojae 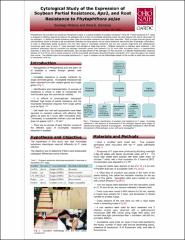