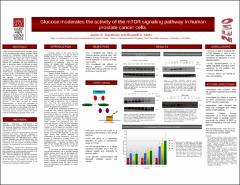 Dietary Energy Restriction (DER) has been shown to be chemopreventive against prostate cancer although the mechanism remains elusive. We hypothesized that reduced plasma glucose levels resulting from DER might play a role in inhibiting prostate cancer cell growth and cell signaling. To address this hypothesis, we used human PC-3 cells to study the effects of glucose on these parameters. PC-3 cells exhibit hyperactivity of the mTOR cellular energy sensing pathway which is associated with increased cell survival. To assay mTOR activity, we performed immunoblotting for phospho- rp-S6, a downstream target of mTOR. We observed a dose-response between 0- 6.25 mM glucose. Upon glucose removal, phosphorylation of rp-S6 decreases rapidly, with a significant effect seen at one hour and abolished almost completely at 18 hours. To confirm that this is a reversible phosphorylation event, we deprived PC-3 cells of glucose for one hour and refed them with 25mM glucose. Restoration of rp-S6 phosphorylation levels occurred within 15 minutes of treatment. We then investigated if the effect seen at 18 hours was due to an increase in cell death and whether or not we could rescue phosphorylation status. We deprived cells of glucose for 18 hours and refed with 25mM glucose. The time required to restore phosphorylation of rp-S6 was increased as compared to the one hour fast. Physiologically, we see a decrease in cell viability only after 48 hours and lowest concentrations of glucose. In conclusion, glucose removal reduces the activity of the mTOR pathway in prostate cancer cells.