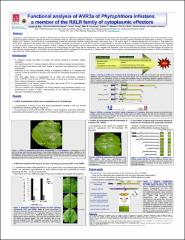 Phytophthora infestans secretes two classes of effectors that are delivered to different cellular compartments of the host where they interact with plant targets to reprogram plant defenses. One class is secreted into the apoplast (apoplastic effectors), whereas the other is translocated inside the plant cell (cytoplasmic effectors). A combination of data mining and functional genomics facilitated the identification of AVR3a, a cytoplasmiceffector of P. infestans. The AVR3a family is represented by at least two polymorphic secreted proteins that differ in two amino acids in the mature region. P. infestans isolates that are avirulent on R3a potato carryAvr3a_K 80I103, whereas virulent isolates carry only avr3a_E80M103. Intracellular co-expression of Avr3a_K80I103 and R3a by agroinfiltration in Nicotiana benthamiana resulted in the hypersensitive response (HR) suggestingthat the two proteins interact in the plant cytoplasm. Indeed, in addition to a signal peptide, AVR3a contains the RXLR motif that is thought to promote the translocation of Phytophthora effectors inside host cells. We took advantage of the N. benthamiana assay to characterize the AVR3a effector and gain insight into the mechanisms that modulate host responses. Virus induced gene silencing showed that R3a-mediated HR requires theplant signaling components SGT1 and HSP90. We also showed that AVR3a suppresses the HR induced by P. infestans INF1 elicitin. Finally, deletion analyses revealed the functional domain of AVR3a. Altogether, thisdata shows that AVR3a exhibits both avirulence and cell death suppression functions.