Trace element concentrations of some plants from the Maumee Basin, Ohio 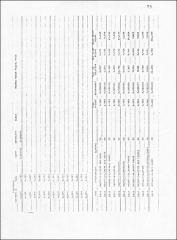 Forty-six plant samples collected from the Maumee River Basin, Ohio, were analyzed with an atomic absorption spectrophotometer to determine the concentration of the following elements: copper, nickel, lead, cadmium, chromium, strontium, and calcium. The result is a body of data which serves as a general indication of the extent to which plants influence the trace element concentration in a hydrologic system. The method of preparing organic samples for spectrophotometric analysis has been refined and the procedure reported. Lists of the data with sample description are included, with tables of maximum, mean, and minimum concentration values. Additional charts and maps are included in attempts at correlation both within this data, and with that found in the literature. A computer program for execution of the Beer's Law conversion for calculating concentrations in milligrams per liter and micrograms per gram from strip chart peak heights is attached as an appendix.