Analysis and discussion of four trace metals - copper, lead, mercury, and zinc - taken from selected sites along the Ottawa River in and near Lima, Ohio 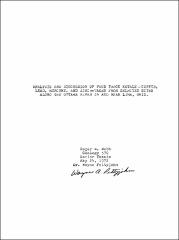 Eight water and sediment samples collected from the Ottawa River in and near Lima, Ohio, were analyzed for their content of four trace metals - copper, lead, mercury, and zinc - by the atomic absorption process. The four following possible origins of these trace metals were considered: geological pollution, industrial and waste disposal effects, chemical pollution, and automobile exhaust emissions. A discussion as to the desirable levels that have been established for public water supplies and the trace metal requirements of the human metabolism is presented. The effects of these trace elements on the human metabolism is also considered, as copper and zinc are believed to be essential to human health but can be toxic, and lead and mercury are not important in the body's biochemical system but are considered cumulative poisons.