Oxidation of magnetite in Wisconsinan till, Union County, Ohio 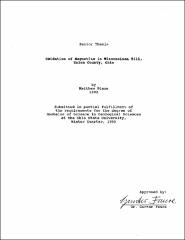 The concentration of magnetite of Late Wisconsin till samples, taken from a one-meter pit in Dover Township, Union County, vary irregularly from 3.5 to 6.9 percent of the heavy mineral fractions. However, the abundance of magnetite in the 63 to 250 μm fractions of till increases systematically with depth from 44 percent of the magnetite in near-surface till to 68 percent at a depth of one meter. The abundance of magnetite of the 250 to 1000 μm fractions decreases in a complementary fashion from 56 percent at the surface to 32 percent at the bottom of the pit. The shift in grain-size distribution of magnetite grains correlates with leaching of calcite whose concentrations increase from zero at the surface to 30 percent at a depth of one meter. Therefore, I attribute the change with depth of the magnetite grain-size distribution to preferential oxidation of small grains to hematite as a consequence of chemical weathering since deposition of the till about 14,000 years B.P. (Goldthwait, et al., 1965). The preferential destruction of small magnetite grains (68-250 μm) compared to larger ones (250-1000 μm) is promoted by the larger surface to volume ratio of the small grains and by the fact that small grains are consumed sooner than large grains at a constant rate of oxidation.