A geochemical interpretation of water quality in the watershed of Big Walnut Creek, Central Ohio 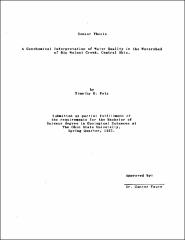 The elemental composition of the water in Big Walnut Creek is influenced by several physical processes that take place along the course of the stream, including mixing and dilution. Big Walnut Creek flows through the town of Gahanna, and subsequently mixes with channel and underground flow from Alum Creek and Blacklick Creek before discharging into the Scioto River. The chemical composition of water can be studied as two-component and three-component mixtures using graphical procedures. In addition, contaminants enter the channel in the form of sewage effluent which typically raise the concentration of sodium in the affected water. As Big Walnut Creek flows through the town of Gahanna the sodium increases 40 percent, which may be due to sewage effluent being discharged by the town. The mixing below the confluence of Alum Creek, Big Walnut Creek, and Blacklick Creek show major increases in sodium and strontium concentrations which are transported down from Blacklick and Alum Creek respectively. Big Walnut Creek enters the Scioto River and introduces a high calcium concentration, which mixes with high sodium and strontium concentrations of the Scioto River.