Petrographic analysis of a columnar section of the Bandelier Tuff, New Mexico 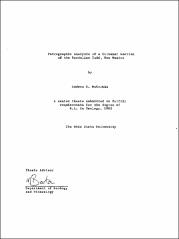 The petrography of the Bandelier Tuff, Jemez Mountains, New Mexico is the result of two catastrophic eruptions producing two large, overlapping calderas. The study of vertical sections of the Bandelier Tuff has proven to be quite interesting in that variations in mineralogy may be indicative of conditions or zonations within the magma chamber prior to these eruptions. In this report, a composite columnar section was taken from Los Alamos Canyon east of Los Alamos, New Mexico. Twenty samples were taken, studied petrographically, and changes in mineralogy, textures and lithic fragment content were plotted against height in the section. A marked increase in the number of phenocryst with depth in the chamber was represented in the petrography of the tuff. Alkali feldspar increased from 9.7 volume percent at the base of the section to 23.4 volume percent at the top showing an increase in temperature with depth in the chamber. An increase in the number of phenocrysts of hypersthene with height in the tuff also showed a tendency toward a more mafic composition of magma with depth in the chamber. The most striking result of this report was the correlation between the number of lithic fragments within the tuff and the degree of welding. The inclusion of lithic fragments appears to retard welding of the tuff after emplacement causing the tuff to be more densely welded in certain positions within the tuff where lithic fragments are less abundant. The results of this report prefer a binary cooling model for pyroclastic flows in which two components are responsible for the cooling rate, thence, welding of the Bandelier Tuff. From information contained within this report, the thermal properties of lithic fragments play a significant role in the degree of welding displayed by an ashflow tuff.