How do Active Sedimentary Basins Dewater as They Deepen and Compact? A Hypothesis in Which Pervasive Crustal Fracturing Provides Persistent Channels for Vertical Fluid Flow 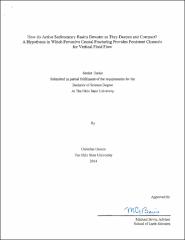 Through this research we propose sedimentary basins dewater through long-lived, nearly vertical mega-fractures in order to accommodate observed increases in compaction, and decreases in porosity with increasing depth. Mondol et al. (2007), and geologists before him, were able to prove that bodies of rock lose porosity through basin history due to compaction. Leading us to ask “How does pore fluid escape from these shrinking pores?”. Evidence for the existence of fine-scale, ephemeral ‘natural fractures’, noted by Cosgrove (2001), proves that migration of subsurface fluids occur throughout basin history on a localized level. Thus, allowing us to hypothesize that crustal fracture systems, form drainage systems for subsiding sedimentary basins. We draw an analogy with transportation networks where: alleys lead to streets, streets to roads, roads to highways, and highways to superhighways. If this hypothesis holds true, these fracture systems may control the movement of subsurface fluids which may have implications for fracking operations.