Conspicuous Bodies: Provincial Belief and the Making of Joyce and Rushdie 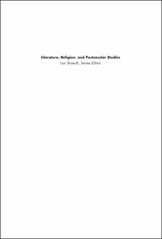 In Conspicuous Bodies: Provincial Belief and the Making of Joyce and Rushdie, Jean Kane re-examines the literature of James Joyce and Salman Rushdie from a post-secularist perspective, arguing that their respective religions hold critical importance in their works. Though Joyce and Rushdie were initially received as cosmopolitans, both authors subsequently reframed their public images and aligned themselves instead with a provincial religious identity, which emphasized the interconnections between religious devotion and embodiment. At the same time, both Joyce and Rushdie managed to resist the doctrinal content of their religions. Conspicuous Bodies presents Joyce as a founder and Rushdie as an inheritor of a distinctive discourse of belief about the importance of physical bodies and knowledge in religious practice. In doing so, it moves the reception of Joyce and Rushdie away from what previous critics have emphasized-away from questions of aesthetics and from a narrow understanding of belief-and instead questions the assumption that belief should be segregated from matters of physicality and knowledge. Kane reintroduces the concept of spiritual embodiment in order to expand our understanding of what counts as spiritual agency in non-western and minority literatures.