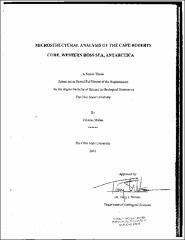 This work analyzes microstructures in core recovered offshore from Cape Roberts, in the westernmost Ross Sea of West Antarctica, in order to understand the rifting evolution of the Victoria Land Basin and its relationship to the uplift of the Transantarctic Mountain rift flank. The study focuses on textures, fabrics and grain-scale structures observed in thin sections of microfaults, veins, and clastic dikes. These observations are used to constrain the deformation mechanisms that produced these structures and the mechanical state of the sediment during deformation. These data, as well as macrostructural features observed in the core, are used to infer relative timing of faulting and sedimentation. Clastic dikes are present throughout the core and commonly follow fault planes, indicating that injections of liquefied sediment used pre-existing faults as conduits for 'dewatering bursts'. Veins also commonly follow pre-existing fault planes and exhibit carbonate and pyrite growth and spany calcite in open voids. In some veins fibrous calcite perpendicular to vein walls suggests opening-mode origin. Microfaults are abundant and display two main types of textures. Some microfaults are characterized by grain-size reduction, poorly sorted angular grains and preferred orientation of clays andlor clast long axes parallel to fault zone walls; these are associated with brittle shear of dewatered and cohesive sediment. Others are 'shear zones' where bedding drag, sediment smearing, and no grain-size reduction indicate pre-lithification ductile flow of sediment by sliding of grains aided by abundant pore fluid. Diagenetic clays, zeolites and precipitation of calcite and sulfides along fault planes post-date microfaulting. The close association of clastic injections, diagenetic mineralization, and faulting indicates that faulting was synchronous with deposition in the rift basin.