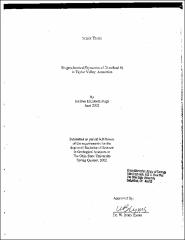 This thesis is part of the McMurdo Dry Valleys (MCM) Long-Tern Ecological Research (LTER) study in Southern Victoria Land, Antarctica. With the exception of the ice-covered lakes, there is little liquid water present in the valleys for most of the year. Chemical weathering is thought to occur more readily in warm and wet climates, however recent research has shown that it can occur in cold and dry environments. The chemical weathering of rocks and sediments in Taylor Valley occurs in the stream channels when liquid water is present, resulting from the melting of glacial ice during the austral summer. Not only is silicon an important element geologically, it is an important biogeochemical element, as aquatic microorganisms, such as diatoms, need it for growth. Silica (Si) is thought to be one of the chemicals that is dissolved by the glacier meltwater as it flows into the lakes. This thesis is an aqueous geochemical study of the Si found in the streams and lakes. Water samples were collected at the beginning of the austral summer and then again in midsummer from Lakes Bonney, Fryxell and Hoare in the Taylor Valley for the past 3 field seasons. Stream samples from each of the lake basins were also collected during the summer months. To analyze the concentrations of reactive Si in the water samples, a colorimetric method was used. Streams of the Lake Fryxell basin had the highest average Si concentrations, - 1.5 mgL. Streams that flow into Lake Hoare had the lowest average concentrations, -0.2 mgL. This difference is most likely a result of the length of the streams. The streams in Lake Fryxell basin are longer that those of the Lake Hoare, and therefore the water is in contact with the underlying sediment for a longer period of time, resulting in more Si being dissolved. The annual flux of Si into the lakes was determined by calculating the average Si concentrations in the streams and multiplying by the volume of stream flow for each lake basin. The highest Si fluxes occurred in the Lake Bonney basin followed by Lake Fryxell and Lake Hoare. When these fluxes are normalized to lake area, the values range from 212 mgsi/m2yr in Lake Bonney, 29 mgsi/m2yr in Lake Fryxell and 12 mgSi/m2yr in Lake Hoare. Si concentrations in the lakes vary over time due to physical, chemical and biological processes. The concentrations in the lakes could be influenced by dilution with stream water of lower Si concentrations, precipitation and dissolution of Si within the water column, or biological uptake of Si by diatoms. For example, a decrease in Si concentration occurred in the upper part of the water column of Lake Hoare between the early and midsummer sample collections in all three seasons. The change in Si is much greater than expected from uptake by diatoms. Approximately 0.03% of the Si decrease can be attributed to biological uptake, based on primary productivity measurements. Therefore, other physical processes must control the Si variations in Lake Hoare.