Interview of Stanislaus A. Antos by Raimund E. Goerler 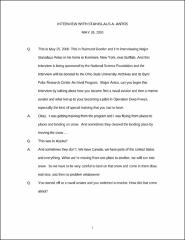 Major Stanislaus Antos was a military aviator who became a pilot for the US Navy Operation Deep Freeze [One] in Antarctica. Previously, he had been an aviator with both the Navy and the Marine Corps, and had experience flying aircraft in the Arctic regions of Alaska and Canada. He joined the expedition midway, in November, 1956, as one of a sizable contingent of Marine pilots and mechanics, and remained in Antarctica until 1958. Once there, he flew a P2V7, a big, heavy aircraft used both for transporting people and equipment. It was an older aircraft outfitted with retractable skis underneath the wheels. When landing on snow, pilots were aided by a system of shaded colored markers that indicated various points along the runway. Antos was the first pilot to land a P2V7 at the South Pole, but Admiral Dufek and a second plane had already landed moments earlier at the Pole using different types of planes. Once it landed at the Pole, it was necessary for a plane to move about in circles for a time to flatten out the snow and compact the runway. This made it easier to take off later. Major Antos and the other military pilots had varied duties in Antarctica. They flew scientists and supplies to various stations, and helped establish and maintain living quarters, such as the Janeway huts, when they were not flying. Some flights involved smaller aircraft for shorter trips, such as unloading supplies from a supply ship. Antos had learned to cut hair as a child, and once gave a haircut to Admiral Dufek, a man he greatly admired. Once he flew the Admiral in a small plane that landed near Mt. Arabeth, an active volcano. He also routinely flew scientists into the field for study. He recalled some of the challenges of wintering over in Antarctica in 1957. For days at a time, the cold and snow would make it impossible to work on the planes. One plane crashed on landing, and Nelson Cole was killed and three other men injured. On some days, it was even difficult to make it to the mess hall for meals. The quality of meals was excellent; there was plenty of meat, and even vitamin supplements. Antos enjoyed leather working as a hobby during winter confinements. One memorable event Antos recalled from his stay in Antarctica was helping to rescue a man who had fallen into a crevasse. He reported also that there were separate quarters for civilian scientists and military personnel, and very little interaction between the two groups. Among the personal difficulties he recalled was that his nose froze over several times. Thawing it out was a painful process. His personal adjustment to living in Antarctica was aided by an excellent priest, Father Darkowsky. Well-attended religious services were held every morning, and Antos made candles for the priest. Special efforts had to be made to keep the communion wine from freezing. The chefs had to alter their recipe for baking bread since the dough would not rise properly in extremely cold weather. Despite the challenges Major Antos recalls fondly his three years in Antarctica, and believes that the experience was a boon to his career. He retired from the Marines in 1963, and served as a flight instructor at Delta for 20 years. Major Topics Role of military pilots during Operation Deep Freeze in Antarctica Personal recollections of daily life in Antarctica